These healthy Vegan Pumpkin Brownies make the perfect fall dessert! They are chocolatey, super fudgy and extremely easy to make. The best thing is that they are made without sugar (refined) and without butter! They are dairy-free and lower in fat than most regular brownies. If you liked my No Bake Pumpkin Caramel Cheesecake Bars, then you should try this recipe next!

How to Make Vegan Pumpkin Brownies

Add all of your wet ingredients (pumpkin puree, maple syrup, coconut oil, plant milk) to a second bowl. Stir with a whisk until well combined.

Now it’s time to combined the two. Pour your wet ingredients into your dry ones and whisk until you end up with a homogenous batter. Add in walnuts and chocolate chips and stir until just combined.

Transfer the brownie batter to your prepared baking pan. Add a handful of additional chocolate chips on top and bake at 180°C (350°F) for 25-30 minutes.

Let cool completely before enjoying it with a big scoop of plant based whipped cream and a cozy mug of oat milk hot chocolate or pumpkin spice latte.

Store them in an airtight container in the fridge. They keep up to 5 days in the fridge or up to a month in the freezer.

Can I make these brownies gluten-free?

Yes, you could try using gluten-free flour instead.

Can I make them nut-free?

Are these vegan pumpkin brownies healthy?

They are healthier than most more traditional brownie recipes. There’s no vegan butter involved making them lower in fat. They’re also lower in sugar than more traditional recipes. There’s no eggs or egg replacer involved, so it’s a cholesterol-free recipe.
They include a generous amount of pumpkin puree as well as walnuts which adds some additional fibre. Pumpkin is high in Vitamin A, vitamin C and B-vitamins as well as beta carotene (antioxidant).

Can I freeze them?

Yes, these brownies are freezer-friendly. Store them in a sealed container and let thaw on the countertop overnight.

Other Pumpkin Recipe To Try 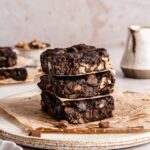 Storing: Store them in an airtight container in the fridge. They keep up to 5 days in the fridge or up to a month in the freezer.