Looking for a vegan whipped cream that’s silky but still dairy-free and oil-free and made without coconut milk? Then this plant based whipped cream recipe is for you. It’s made with aquafaba and ready in few minutes. It tastes fantastic in recipes like this Oat Milk Hot Chocolate or as a Vegan Chocolate Brownie topping.

This recipe asks for aquafaba. Aquafaba is bean water- the liquid or brine from canned chickpeas or beans. Usually, when using chickpeas you’d rinse your beans in a colander to get rid of the liquid. But it can also be used to make vegan whipped cream. When you beat this liquid (with a hand or stand mixer), you’ll end up with light and fluffy peaks.

How to Make Plant Based Whipped Cream

If you prefer a non-dairy whipped cream with no coconut in it, this recipe is for you! While it can be a bit tricky to achieve a satisfying whipped cream texture with coconut milk, it is much easier with aquafaba!

This vegan whipped cream recipe is quick and easy and only requires 3 ingredient. It can be prepared without chilling time – it’s ready in a couple of minutes!

Drain the liquid from a can of chickpeas and put it into a mixing bowl (either for your standing mixer or a hand mixer).

Then it’s time to start whipping. Beat the aquafaba until it forms semi-stiff peaks. This will take about 4-6 minutes, depending on the texture of your aquafaba and the equipment you use.

Then add the powdered sugar and beat the mixture for another 2-4 minutes.

When using a hand mixer it works exactly the same, but I have found to get better results when using a stand mixer.

How to Use This Vegan Whipped Cream?

Storing and Freezing - How long does it last?

Store it in an airtight container in the fridge for about 4 days.

Once whipped, it's texture won't last indefinitley and it will deflate over time. But you can always rewhip it, right before using it the next time (but make sure that it’s cold/ stored in the fridge before rewhipping it).

The unwhipped liquid also stays in the fridge for up to 4 days or you could also freeze it and use it another time.

Is aquafaba in all beans?

Yes, aquafaba is a word for bean water. While this recipe uses chickpea water, you could also use the liquid from white beans. I don’t recommend using kidney beans, because you will end up with a brownish whipped cream.

Do you need cream of tartar for aquafaba? What does it do to it?

Yes, it acts as a stabilizer and helps with the texture of the aquafaba. If you skipped it, the recipe works but the peaks will be much less firm. They might also deflate quicker.

What can you use instead of cream of tartar for aquafaba?

How does aquafaba whipped cream taste?

While some say aquafaba itself has a quite neutral taste, others (including me) don’t find the taste all too great. However, when you add some powdered sugar, you will end up with a light and fluffy, sweet tasting whipped cream.

While it does seem to contain some of the nutrients from the chickpeas, they seem to be very low. It doesn't contain any fat or oil but the nutrient density is also quite low.

Try These Recipes with Aquafaba 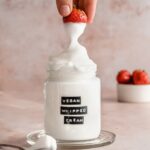 Serving: 1 one eight-cup (2 tbsp) | Calories: 23kcal | Carbohydrates: 6g | Protein: 1g | Sodium: 1mg | Potassium: 8mg | Sugar: 6g | Calcium: 1mg | Iron: 1mg
All nutritional information is based on third-party calculations and should be considered estimates.
Tried this recipe?Tag @wholefoodsoulfood__kitchen on Instagram so we can admire your creations! Or leave a rating and comment telling us how you liked it!
« Healthy (ish) Vegan Rocky Road
Oat Milk Hot Chocolate (Vegan) »