These vegan TVP tacos are the perfect recipe for a meatless Taco-Tuesday! Similar to our TVP meatballs, they are ready in 30 minutes and super quick and easy to make!

There's no special equipment needed other than a large frying pan which makes it a really basic recipe and the perfect weeknight dinner! Topped with Homemade Guacamole, spicy Mango Habanero Salsa or Cucumber Pico de Gallo these tacos are a real flavor explosion!

TVP is short for "textured vegetable protein" and is typically made from soy flour. It's often used as a vegan meat substitute because it has a similar texture to ground meat.

Because of it's specific texture and high protein content it's often used in vegan and vegetarian recipes. It's also high in fiber but very low in fat. Soya mince is also inexpensive and super versatile! It tastes amazing as a meat substitute in chili and stew recipes, vegan burger recipes or vegan meatballs.

How To Make TVP Taco Meat

Vegan taco meat is really easy to prepare and can be used in a variety of recipes. To prepare these tacos you won't need any special equipment other than a large frying pan.

Start by soaking the TVP in veggie broth and set aside.

Heat oil in a large skillet over medium heat. For an oil-free taco recipe use 3 tablespoon of soy sauce instead of oil. Add onion and garlic and saute onion until soft and translucent.

Drain the TVP, then add it to the pan. Add the spices (paprika powder, smoked paprika powder & cumin) and cook for about 5 minutes until the TVP releases some veggie broth.

Add chopped bell peppers, tomato paste and maple syrup (optional) and let simmer with a lid on for about 15 minutes or until peppers are soft. Add a dash of water as needed.

In the meantime, chop your raw veggies and prepare the guacamole or your salsa of choice.

Put some lettuce into each taco shell, followed by the tvp meat mixture, cucumber, red cabbage and a generous dollop of guacamole (or other salsa of choice).

Store leftover tvp taco meat mixture in an airtight container in the fridge for up to 4 days. Gently reheat on low heat while constantly stirring.

Is textured vegetable protein good for you?

TVP is very low in fat but high in protein. It's a complete protein meaning that it contains all essential amino acids. It's also high in fiber and contains some vitamins and minerals such as Vitamin B6, Folate, Potassium and iron.

How do you make TVP taste better?

TVP can be a great meat substitute because of its similar texture to ground beef. However, it's quite neutral in taste so it needs quite some seasoning for it to taste exciting. In this recipe, we used a mix of spices and tomato sauce.

Do I need to soak TVP?

Yes, you'll need to soak the dry tvp in water or veggie stock to rehydrate it. After about 5-10 minutes, once it has soaked up all the liquid, it will be ready to use.

Where can I find TVP?

If they don't have it in your local grocery store you might want to check natural food stores or order online.

How do I heat up taco shells?

Other Recipes to Try 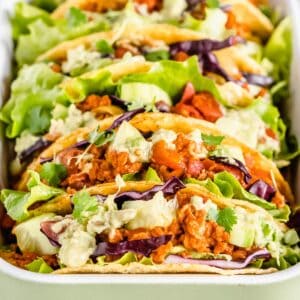