These vegan Jackfruit Birria Tacos are the plant-based version of the traditional beef Birria tacos you might know. They are perfect for special occasions such as game nights or Cinco de Mayo celebrations.

If you're into Mexican food (who doesn't really?) then this recipe is for you. Enjoy these vegan Birria tacos with some spicy mango habanero salsa, homemade guacamole or cucumber pico de gallo on the side.

Birria is a traditional Mexican dish from the state of Jalisco that usually consists of meat (traditionally goat meat) simmered in a spicy adobo sauce. Traditionally, it has been consumed as a soup or stew but in recent years become a popular taco filling.

This delicious Mexican dish has become popular among non-meat-eaters as well. Oyster mushrooms, jackfruit or TVP are popular meat substitutes to create vegetarian Birria tacos. Especially Jackfruit is a great meat replacement in this recipe because after you mash it, its texture resembles shredded meat.

Another variation of the Birria is the "quesabirria"- a taco that's filled with melted cheese as well as the hearty "meat" filling. That's also how we prepared it below.

How to Make Vegan Birria Tacos

Preparing these vegetarian tacos takes a bit more time than the usual recipes on our website but it's so worth it!

Start by removing the seeds from the guajillo chiles. Feel free to keep them if you prefer a spicy sauce.

To prepare the Birria sauce put tomatoes, onion, bay leaves, water and salt into a large stockpot. Bring to a boil and let simmer for about 30 minutes.

Continue by heating some olive oil in a large frying pan (cast iron or non-stick). Add chopped onion and garlic and fry until slightly brown and translucent.

Add jackfruit chunks and mash them with a potato masher or a fork so that they start resembling pulled meat. Fry for a couple of minutes until the jackfruit becomes crispy- don't skip this step or you'll end up with a mushy jackfruit texture.

Drain the cooked veggies and save the broth. Transfer the veggies (without the bay leaves) to a blender, add the spices, a pinch of salt, 1 cup of the broth and ½ cup of veggie stock.

Blend until smooth, then pour the sauce onto the jackfruit mixture. Keep a small bowl of Birria on the side if you want to use it as a dipping sauce for later.

Bring to boil, then reduce heat and let simmer on low heat with a lid on for 40 minutes.

Fill your favorite type of taco with some marinated jackfruit chunks, (vegan) mozzarella, guacamole (or other salsa) and fresh greens such as fresh cilantro or lettuce. Fold tacos your preferred way.

Heat a little oil in a large skillet over medium-high heat. Sprinkle on some vegan mozzarella, then place the folded tortilla on top of the cheese. Fry for about half a minute, then flip and fry the other side of the tortilla until golden brown. Continue with the remaining tortillas.

Can I replace the jackfruit with something else?

If you can't get your hand on jackfruit, you could try using pulled king oyster mushrooms instead. Because of their meaty texture, the also make an amazing filling. The overall texture of the taco will be different though.

What are Birria tacos made of?

Traditionally they are made of pulled goat meat in a spicy tomato sauce. The recipe below is a vegan version of this popular dish using jackfruit instead of meat.

Not really, young green jackfruit has a hearty texture and is quite neutral in taste. It also soaks up flavors easily which is why it's a great alternative to shredded meat. However, it won't taste the same as meat.

SIGN UP for the WSK newsletter and get the newest recipes delivered right to your inbox! 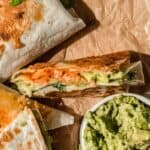