Although Goulash is a traditional Hungarian dish, it has become a super popular dish among many European countries. This authentic potato goulash requires only 1 pot and 10 simple ingredients. I'm thrilled to announce that this Potato Goulash recipe has made it into Thrive Mag's Summer Edition- the #1 Plant-Based Magazine in the US.

How to Make Potato Goulash

Potato Goulash is a traditional warm stew-like meal made of potatoes in a thick gravy and traditionally eaten with dark sourdough bread (typical Austrian bread). This recipe is gluten-free, low in oil and naturally vegan. This goulash is one of our favourite vegan recipes because it's so quick and easy yet super filling and delicious.

Start by heating 1-2 tablespoons oil in a large non-stick pot over medium-low heat. Cook onion and garlic for a couple of minutes until translucent. Stir often preferably with a wooden spoon to avoid burning and a bitter taste.

Next, add paprika powder, diced potatoes, vegetable stock and tomato paste. Add a pinch of salt and let simmer with a lid on for about 20-25 minutes or until potatoes are soft. Cooking time will depend on how small you cut your potato pieces though. We recommend cutting them into bite-sized pieces (around ½ to ¾ inch cubes). In the meantime, slice sausages if you want to include them and add it to the goulash.

To make the recipe thicker and creamier, we are adding some potato or corn starch. In a small bowl, dissolve 1 tablespoon of potato starch in water and add it to the goulash. This will bind and thicken the sauce resulting in a creamy consistency.

Sprinkle with fresh herbs such as fresh chopped parsley or other preferred toppings.

Serve with a slice of flat bread such as our Easy Naan Bread and side dish of choice!

How long does goulash last in the fridge?

This goulash keeps in the fridge for up to 3 days. Make sure to store it in an airtight container.

Can you freeze goulash?

Yes, goulash is freezer-friendly. Simple store it in an airtight container to freeze it and let it thaw in the fridge or on the counter overnight before consuming it. Gently reheat in the microwave or on the stove-top. You might need to add a splash of water.

Traditional goulash is a stew or thick soup that can include potatoes, meat or other vegetables in a thick dark cravy. It gets its distinct colours mainly from paprika seasoning. Note that traditional Hungarian goulash has very little in common with American goulash which usually includes some type of pasta such as egg noogles or macaroni.

What country is goulash associated with?

Goulash is originally an Hungarian dish. Since Austria and Hungary were one country at one point (Austro-Hungarian Empire), is has found its way into the Austrian cuisine. It's not only popular in Hungary and Austria though but many other countries have been altering the orignal recipe since then and created their own versions of this dish. So the Czech Rebulic, Germany, Italy- they all have their own way of preparing unique goulash recipes.

What are the different types of goulash?

The variations of goulash recipes out there are endless. Many countries have come up with their own goulash recipes- differeing in ingredients and taste. Popular and well know variations would include the famous beef goulash with its main ingredient being veal or beef cubes. It's can be compared to beef stew. Then we've got potato goulash, basically consisting of potatoes and gravy. Other ingredients often included in goulash are sauerkraut or (smoked) sausages.

Starchy potatoes such as Yukon gold, fingerling, or russet potato are best for potato goulash. With their higher starch content, they help making the goulash creamier.

Can I reheat goulash?

The best thing about this recipe is that it's meal-prep friendly and a great make-ahead dish- it will taste even better the next day! You could prepare it the evening before and simply store it in an airtight container in the fridge. Gently reheat while stirring occasionally- you might need to add an additional splash of water. 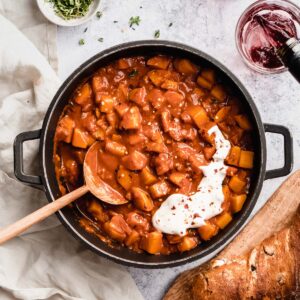 Serving: 1. | Calories: 403kcal | Carbohydrates: 93g | Protein: 11g | Fat: 1g | Sodium: 43mg | Potassium: 2315mg | Fiber: 10g
All nutritional information is based on third-party calculations and should be considered estimates.
Tried this recipe?Leave a rating and comment telling us how you liked it! Or tag @wholefoodsoulfood__kitchen on Instagram so we can admire your creations!