Homemade naan is super easy to make and tastes absolutely delicious! This fluffy naan is dairy-free, made without yogurt and you'll only need 7 simple ingredients!

This vegan naan bread is a must to try with our creamy Red Lentil Dahl, Sweet Potato Red Lenti Curry or Moroccan Stewed White Beans.

Naan is a type of leavened flatbread, eaten primarily in India and Western and Central Asia. It's a popular side dish and often served along with curries, soups or meat dishes.

It can be served plain or stuffed with cheese, garlic or potatoes.

How to Make Naan without Yogurt

This easy naan recipe is super quick and easy to make and only requires 7 ingredients. There's no special equipment needed aside from a large mixing bowl and a rolling pin.

STEP 1: Activate the yeast. For the yeast to do its trick it needs to be activated. Dissolve the yeast and ½ teaspoon of sugar in warm water (not hot) using a whisk.

Then set aside for about 10 minutes. During the activation process, the active dry yeast will start to foam and form little bubbles.

STEP 2: Make the dough. Whisk together the dry ingredients (flour and salt) in a large mixing bowl.

STEP 3: Let dough rest. Stir with a spatula or whisk and then knead the dough until it comes together.

Cover the naan dough with a tea towel and let it rise for about 30 minutes to 1h at room temperature.

Let the dough rise in an airtight container that's big enough to hold the dough after it's doubled in size. That way it won't dry out as much.

STEP 4: Roll out the dough balls. Divide the dough into 6 equal parts.

Roll out each dough ball on a well-floured, flat surface using a rolling pin.

STEP 5: Cook. Heat a large skillet or frying pan over medium-high heat. Place the naan in the hot pan and cook on one side for about 2 minutes until you can see bubbles forming.

Flip and continue to cook on the other side until you can see brown spots.

There are many different ways to enjoy fresh, homemade naan. Find some suggestions below.

Store any left-over naan in an airtight container at room temperature. However, it definitely tastes best when consumed right away!

What is the difference between a naan and a pita bread?

Pita is thicker and more used for stuffing in recipes such as kebab or falafel. Naan is more bubbly and usually eaten as a side dish.

Can you make naan without yogurt?

Absolutely, you can easily make naan without yogurt. The oil in combination with the yeast will help turn this into soft and fluffy bread.

What can I substitute for yogurt in naan?

Sometimes, plain yogurt is replaced with sour cream but there's no need to replace the yogurt at all.

Recipes to try with naan

If you tried this or any other recipe on the blog let me know how you liked it by leaving a comment or rating below! SIGN UP for the WSK newsletter and get the newest recipes delivered right to your inbox! 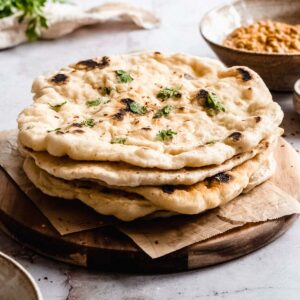