This vegan potato soup is incredibly rich and creamy and consists of only 6 simple ingredients. The best part is that it's ready in 20 minutes making it the perfect speedy weeknight dinner option for the whole family.

It always amazes me how easily you can create indulgent, thick soups even with no cream or butter involved. Soups are such an amazing way to fuel up on veggies while not being overly filling.

Why you'll love this recipe

How to make vegan potato soup

This comforting soup recipe can easily be turned into a stovetop recipe. The recipe steps are exactly the same but cooking time is longer though (around 20 minutes) and you might need to add some more broth along the way.

If you would like to add some crispy mushrooms as a topping (highly recommended!) then start by preparing your mushrooms first.

Preheat oven to 350°F (180°C). In a medium bowl, mix together all of the ingredients for the soy-maple sauce. Then add cleaned and sliced mushrooms and let them soak for about 10 minutes.

Drain any excess liquid and spread them evenly onto a baking sheet lined with parchment paper and bake for 15-20 minutes.

Step 2: Sauté onion, garlic & leek. Turn on the sauté function of your instant pot and add olive oil, diced onion, garlic and leek. Cook until onion is translucent and soft.

The pressure cooker will quickly become quite hot- make sure not to brown the onion. Stir constantly and have the potato cubes and vegetable stock ready.

Add the diced potatoes, veggie broth, salt and black pepper and close the lid (make sure the pressure release handle is set to "sealing" position.)

Set the instant pot on high and pressure cook for 10 minutes. It will take a couple of minutes for the instant pot to start so don't worry, just let it do its thing :-).

Do a quick release to release the steam. Move the release handle into "venting position". I usually use a knife or similar so that I don't need to touch the handle with my fingers and risk burning from the hot steam

Potatoes will be fork tender by then and soup slightly thickened.

With an immersion blender, blend about ½ of the soup so you'll end up with a velvety smooth soup that still includes some potato chunks. Alternatively, you could transfer ½ of the soup to a (high speed) blender or food processor and blend until smooth. Then stir the pureed soup back into the pot.

As with almost any simple soup recipe, it's the toppings that can make a huge difference and create an even more delicious soup. Below you'll find some of our favorite toppings.

While this soup can be enjoyed on its own as a starter or light meal you could also serve this vegan potato soup along with some side dish to feed even the hungriest crowd and turn it into a complete meal. Below you'll find some suggestions:

Which potatoes to use for potato soup?

Our favorite ones for making this soup are Yukon golds but this recipe also works with other types such as russet potatoes or red potatoes. Don't use sweet

How to thicken potato soup without milk?

By cooking the potatoes, they release their starches which naturally thickens the soup. Additionally, by blending parts of it a thick and creamy consistency can be achieved even without the addition of heavy cream or milk.

Can potato soup be made ahead of time?

Yes, this soup could be prepared ahead of time. Reheat in the instant pot by pressing the "keep warm" button and stirring every so often.

Can I make this vegan potato soup without a pressure cooker?

Yes, this recipe can easily be turned into a stovetop recipe. Cooking time is longer though (around 20 minutes) and you might need to add some more broth along the way.

Is this soup healthy?

The following recipe is made without butter, heavy cream or bacon making it healthier and lower in fat than more traditional recipes. Potatoes themselves are a good source of fibre and packed with antioxidants.

Can I use a potato masher instead of a blender?

For best results and a smooth texture, I recommend using a stick blender or regular blender that is able to blend hot liquids.

If you tried this or any other recipe on the blog let me know how you liked it by leaving a comment or rating below! SIGN UP for the WSK newsletter and get the newest recipes delivered right to your inbox! 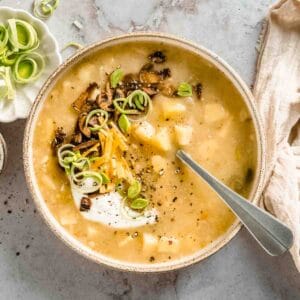