This rich and creamy eggnog is dairy-free, refined sugar-free and bursts with warm Christmas flavours. Below you'll find two versions- one eggless vegan eggnog recipe and a more traditional almond milk eggnog that includes eggs. Both consist of only a few simple ingredients and are easy to make!

While almond milk eggnog is already available from some brands such as Blue Diamond or Califia Farms, you will be amazed by how quick and easy you can make your own eggnog with almond milk at home. For more cozy, dairy-free drinks check out Pumpkin Spice Latte or Oatmilk Hot Chocolate.

Why You'll Love These Recipes

This dairy-free eggnog recipe is perfect for vegans or if you don't feel comfortable about consuming raw eggs. It's made in a blender with 6 simple ingredients.

For the cashews to add this incredibly creamy texture, it's important that they are soaked in water first. Soak them overnight or If you're short on time you can quick-soak them in very hot water for about 10 minutes.

Once the cashews are ready, put all of the ingredients (cashews, almond milk, maple syrup, vanilla extract, spices) into a (high speed) blender and blend until smooth.

Taste and adjust sweetness by adding more maple syrup or sweetener of choice. If you prefer a thinner texture, gradually add more milk and blend again.

This one is for you if you're looking for a more traditional eggnog recipe that's still dairy-free. We simply swap the cashews for eggs. All in all it consists of 7 basic ingredients.

Add egg yolks, half the amount of almond milk (½ cup) and maple syrup (or sweetener of choice) to a (high speed) blender. Blend for about 30 seconds to 1 minute until well combined and slightly frothy.

Make sure though that the liquid doesn't get hot from blending too long/ intensively. Alternatively, you could use a food processor or a hand blender.

In the meantime, take away another ⅛ cup or so from the almond milk that's left and add the vanilla pudding powder. Whisk until fully dissolved and all lumps are gone.

Tempering is a process in which two ingredients with different temperatures are mixed together. It's used if one of the ingredients crudles easily. In our case it's the eggs.

Put the rest of the almond milk (little less than ½ cup) into a medium or large saucepan.  Slowly heat on low-medium heat until the milk is hot but NOT simmering or even boiling. Remove from heat.

Turn the blender back on (very low speed) and very slowly pour in the warm almond milk.

Transfer the mixture from the blender back into the saucepan. Add spices (nutmeg, cinnamon, vanilla extract) and dissolved pudding powder.

Cook the eggnog on low-medium heat until it thickens slightly while constantly stirring. Be patient- this will take around 10 minutes.

Do not allow the eggnog to simmer or boil- we don't want to end up with scrambled eggs! If you have a candy thermometer you can use it and cook until the eggnog reaches 160°F / 70°C.

If the eggnog does curdle, put it back into the blender and blend again.

If you want to remove the froth, strain eggnog through a mesh strainer (optional). Then transfer it to an airtight glass jar in the fridge.

Serve warm or cold and with or without liquor (rum, bourbon or brandy). Add a generous scoop of Vegan Whipped Cream and a dash of cinnamon shortly before serving.

While the vegan version of this recipe is dead simple to make, the non-vegan one can be a bit more delicate to handle.

Keep both eggnog versions in an airtight container in the fridge for up to 2-3 days. You could also freeze it for up to 3 months.

The traditional beverage is loaded with fat and sugar. Both our versions also contain some fat as well as sugar but in much less quantity as there's no heavy cream involved. While traditional eggnog recipes are often high in saturated fat this vegan eggnog recipe mostly consists of mono-and polyunsaturated fat from the cashews. It's also cholesterol-free. The non-vegan version includes eggs which are a great source of protein, vitamins and minerals but also fat.

Can this eggnog be made into an alcoholic drink?

Absolutely! Just add your liquor of choice to the bottom of the serving glass. Then fill up with eggnog and stir until well combined. Start with 0.75 ounces (20ml) of liquor per ½ cup of eggnog and work your way up from there. The alcohol also helps preserve the eggnog's shelf life.

What alcohol goes best with eggnog?

Traditional eggnog is usually made with rum, brandy or bourbon with dark rum being our favourite. Other types of alcohol such as coffee liqueur, amaretto or vodka might also taste great. Simply test for yourself what liquor you like best.

Can it be prepared ahead of time?

Absolutely! Both versions can be made ahead of time. Simply store in an airtight container in the fridge for 2-3 days.

Can you freeze eggnog?

Yes, eggnog can be frozen for up to 6 months.

Can eggnog give you salmonella?

Even though the risk of contracting it seems to be small, consuming raw eggs could potentially leave you with salmonella. You could pasteurize eggs at home but it can be tricky. The heating process is supposed to kill off the bacteria that can cause Salmonella. Overcooking the eggs leads to heard boiled eggs, undercooking might not kill off all of the bacteria. The FDA recommends using shell eggs that have been treated to destroy Salmonella by pasteurization. They also say that pasteurized eggs need to reach 160F or hotter to be considered safe.

Why do I need to temper eggs?

Tempering is a process in which two ingredients with a different temperatures are carefully mixed together. It's used if one of the ingredients crudles easily. In our case it's the eggs. The secret is to work slowly and be patient. A low temperature and constant stirring is also really important.

How to fix curdled eggnog?

If your yolks curdled nonetheless, you might be able to save the eggnog by putting it back into the blender and blend again. It's not guaranteed but worth a try.

Other Recipes To Try

If you tried this or any other recipe on the blog let me know how you liked it by leaving a comment/rating below! SIGN UP for the WSK newsletter and get the newest recipes delivered right to your inbox! 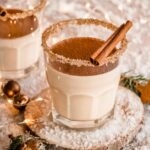 Almond Milk Eggnog (with + without eggs)