This is my Grandma's Vegan Nut Roll Recipe. The original recipe was one of my Grandma's (and later mum's) most popular recipes that she regularly used to prepare as a coffee snack or even as breakfast, mostly during festive season. Traditional nut rolls consist of a soft, sweet dough, that is filled with a nut mixture. This is a vegan version of it, which also contains far less butter than the original recipe, making it a low-fat option. Tastes especially good alongside some cozy oat milk hot chocolate.

If using an egg replacement, start by preparing it according to package instructions.

Next put the flour into the bowl of stand mixer, making a well in the centre. You'll need to crumbled in your fresh yeast, then add sugar, lemon zest and egg replacement.

Warm up milk and butter in a small saucepan, stirring constantly until butter is fully dissolved. Pour this mixture over your yeast mixture in the centre and stir well until all the ingredients in the center are almost dissolved.

Then it's time to put your bowl onto your standing mixer fitted with the dough hook and mix on low speed until a dough forms.

In the meantime, prepare your nut filling.

Add all of the nut filling ingredients to a small saucepan and let simmer over low heat until a slightly firm mix forms.

After letting the dough rest for about 30 minutes,  roll out your dough on a well-floured surface to a thickness of about 5mm. Then spread your nut mix evenly onto your dough leaving a 1cm boarder all around.

Roll up the dough, put it on a baking tray covered with baking paper and bake for about 30 minutes. 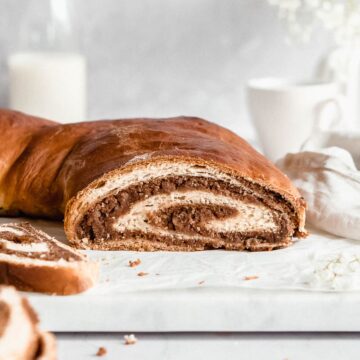