Can you make pancakes without baking powder? Absolutely! With only 4 simple ingredients, these pancakes are light, fluffy and super easy to make.

Is there a better way to start the weekend than with some homemade pancakes? This pancake recipe requires no baking powder (or baking soda) and comes in handy when you ran out of leavening agents but crave some fluffy pancakes.

Can you make pancakes without baking powder?

The answer is simple: yes, by using whipped egg whites instead. When you whip egg whites, you can see little bubbles forming because you're forcing air into the egg whites. If you continue beating, you will see that the egg whites change from foamy to soft peaks to stiff peaks.

When you add the whipped egg whites to the pancake batter, this will create incredibly fluffy and airy pancakes (even without the use of baking powder)

These simple pancakes involve only 4 ingredients and are super easy to make.

STEP 3: Combine. Make a well in the center of the bowl. Add egg yolks and maple syrup (optional) and start whisking only these two together.

Then add your milk.

STEP 4: Batter. Whisk together dry and wet ingredients using a spatula. Do not over mix!

STEP 6: Fold in half of the whipped egg whites. Stir carefully into the pancake batter.

Then gently fold in other half of the egg whites.

STEP 7: Cook pancakes. Heat some olive oil in a large skillet over medium-low heat. Add about ⅓ cup of the pancake mixture and let cook for 2-3 minutes.

Slide a spatula under the pancake to see if the edges are golden brown. Then flip and cook on the other side.

What can I use instead of baking powder in pancakes?

Using whipped egg whites instead will result in super light, airy and fluffy pancakes. Other than that, you could use self raising flour which already includes a leavening agent. Other recommended subsitutes such as in this article include lemon juice, cream of tartar or baking soda.

Do I need to let the batter rest?

No, on the contrary,

Can I make them gluten-free?

You could try using a gluten-free flour blend- however I haven't tested these pancakes with with a gf flour.

Can you over beat egg whites?

Yes, actually. If you continue beating them even though they have already formed stiff peaks, they might start losing their shape again. This means that you've probably beaten them for too long.

Why are my egg whites not getting stiff?

Usually that happens when the egg whites contain some sort of fat (most often from the egg yolks not being separated carefully enough). 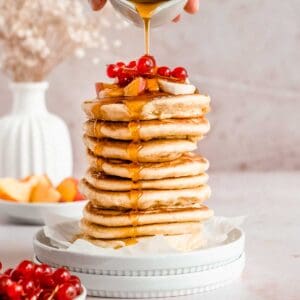